On Tuesday, September 15 of 2020, the Spanish government approved the act of democratic memory in a council of ministers. This is a new regulation that aims to implement new facilities when obtaining Spanish citizenship. So if you are a descendant of a Spanish exile, keep on reading, because this law will make it much easier for you to obtain the nationality, and now we are going to explain how!

What is the Democratic Memory Act all about?

First of all, let’s start by defining the content of this Democratic Law and the reasons that lead to its creation.

It is a reparative measure for all those who were exiled from Spain for political or ideological reasons, especially during the Civil War and the Spanish dictatorship.

This measure aims to compensate all those people by facilitating the acquisition of nationality by their descendants; more specifically those who were born outside Spain but are children or grandchildren of those who had to leave the country.

But going more granular, how will it benefit the descendants of the exiles?

Although we do not yet know 100% of the dispositions of this new law, the first advantage is that you won’t need to prove one year of legal residence in the country to apply for nationality. You will be able to get it directly (and from your country of origin), as you will acquire the option right.

Remember that right now, if you are a descendant of a Spanish citizen, you can take advantage of a temporary period of only 1 year of residency in order to apply for citizenship. With this new Act of Democratic Memory, this year would not be necessary either.

So, as you can see, this law would have two main purposes:

Who will benefit from this law?

Firstly, the descendants of those who had to go into exile. That is, if you were born outside of Spain but your father, mother, grandfather or grandmother went into exile from the country for their beliefs or due political reasons, and therefore renounced Spanish nationality, you will have certain facilities when applying for citizenship thanks to this law.

Keep in mind that at no time are great-grandparents or great-grandchildren mentioned, so in those cases the law would not be effective.

But, on the other hand, there is another group that can also benefit from it. Because this draft gives the possibility of acquiring nationality by letter of nature to the volunteers who are members of the International Brigades. These would do so by letter of naturalization.

Another important aspect to mention is its application deadline, which will be limited.

That is to say, you will only have a period of 2 years to carry out the procedure from the moment the regulation is approved and the law comes into force.

So it is very important that you keep track of it its approval date; and once it happens, start the process as soon as possible so you don’t miss the deadline.

Our recommendation? Start moving now. If this law fits your current situation, since you are an exile’s descendant, start looking for all the necessary documentation so that when the law is approved you can have everything ready.

You will need to prove, 100% sure, the family relationship with your ascendants. So if you already get the family documents that verify it, you will be advancing a very important part of the legal procedure.

Not a law, it is still a draft

It is important to make a special mention of this point to solve many of the doubts you may be having right now.

The first thing you should keep in mind is that the Democratic Memory Law has not yet come into force.

In other words, it is not yet possible to start the procedure and apply for citizenship by taking advantage of its benefits.

Right now, it is simply a draft law, still in the gestation phase. It must still go through Congress, where there it will be voted. This means that it may undergo many modifications until it is finally approved.

We do not yet know either the specific requirements or exactly how the procedure will be or which of its advantages will end up coming true.

In fact, the official text has not yet been published in Congress. We have the approximate content thanks to a press release published by Moncloa.

On the other hand, there are also other new ways to obtain citizenship that are still in the process of being created, such as the famous Grandchildren Law.

So, for now, we must wait. We need to wait for the law to be published (and we do not yet know what the date will be) and see exactly how the situation evolves.

Get notified once this law is approved

As we have mentioned in the previous section, it is still early to draw conclusions.

The law is laying within a process of approval, and we do not know for sure when it will come into force.

However, if you want to be up to date and receive the latest news about this act, as well as be the first one to know when it comes into force exactly, subscribe to our blog and we will inform you via email: 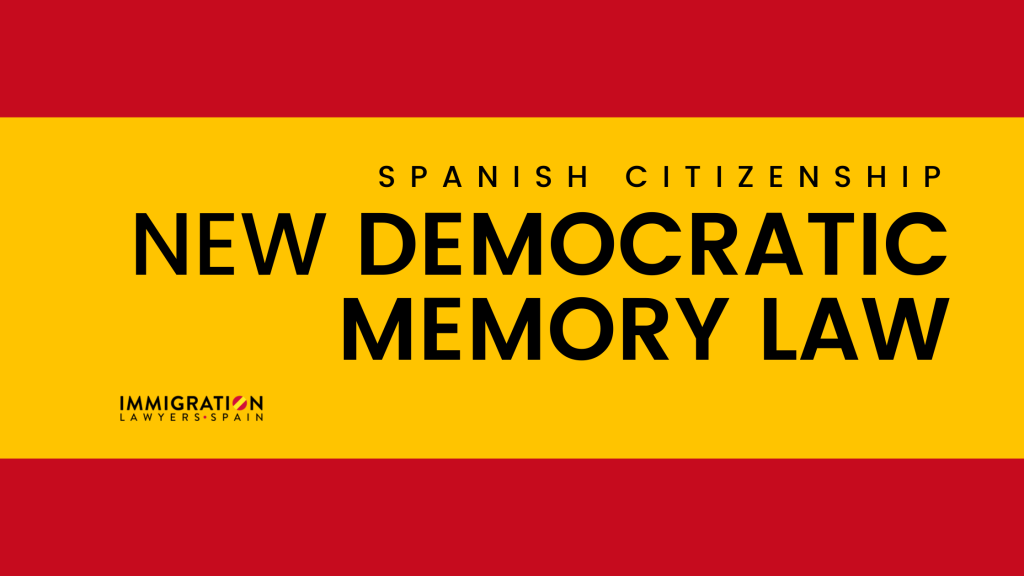