Exemption Spanish Citizenship Exams: When Can You Avoid Taking Them?

Do I actually have to take the nationality exams? Can I avoid it?

There are 3 different cases in which you are not requested to take them. And in order to do so, you will have to apply for a waiver or exemption from these Spanish nationality exams. In this article, you will learn who can actually apply for this exemption and exactly how to do it.

How has to take the Spanish citizenship tests?

Before 2015, if you wanted to complete your nationality application you had to go through an in-person interview at the Civil Registry.

One of the main drawbacks of this is that each Civil Registry had its own procedure and therefore questions, with the difficulty varying according to the specific application location.

In some Registries, the interview was very simple and easy, while in others it was more complicated.

In addition to this interview, a report was issued based on the subjective interpretation made by a public worker, which ended up finally approving or denying the application.

In order to solve these disadvantages (and thus unify the process and configure it in a more objective way to verify that the person is integrated with Spain and its culture/society), since 2015 the process changes completely.

It is since then that in order to obtain citizenship in Spain, foreigners must pass two exams:

These tests make up the well-known Spanish nationality exams that we have talked so much about in this post.

In that sense, everyone of legal age (18 years old in Spain) has to take both tests.

However, there are exceptions.

For example, if you have Spanish as your mother tongue, since you are from a Latin American country, it is not necessary to take the language test.

However, for the rest of the cases, there are 3 situations that allow not to take either of the two exams, and for this, a waiver must be requested.

What is the Spanish citizenship test exemption or “dispensa”?

The “dispensa” or waiver is nothing more than the document that exempts the foreigner applying for Spanish nationality from having to take the two exams required for the procedure.

This document is requested to the Ministry of Justice, who will evaluate the request on a case-by-case basis and will finally issue it.

In the following sections we will see who exactly can apply for it and which cases are contemplated, since the general rule obliges any foreigner to take these 2 exams.

At the time of applying for citizenship and submitting your file online, instead of uploading the proof that you have passed the exams, you would upload this exemption document (or the certificate of completion of ESO as we will see below).

There are two types of waivers: a total waiver, or a partial waiver (something you can also apply for and which is highly recommended in many cases).

Who can avoid taking the citizenship exams?

The current regulation establishes three groups of applicants who can request a waiver and avoid taking the exams:

How to request this exemption

In the first two cases seen above, a formal application procedure is required to obtain the exemption.

This involves a formal application to the Ministry of Justice requesting that they be exempted from such examinations.

Once requested and approved, this Ministry will proceed to its issuance, which often involves significant delays as it takes several months (and therefore hinders the nationality process as it is necessary to attach a such document to start).

In case a partial waiver is granted, you will have to wait to receive it before you can start your examination (oral format).

On the other hand, we find the last case, much more agile and simple, since this process is not necessary and it is possible to make the application for nationality directly attaching the title of ESO (in the section in which the proof of the exams is required).

Having completed the 4 years of compulsory secondary education, it is understood that the foreigner has been correctly integrated into the country and has the necessary knowledge about Spain thanks to this education.

Current problems with these waivers and solution

At present, there are two major problems that applicants for nationality encounter in relation to these waivers.

Firstly, the delays in processing and issuance, which can take up to months. This finally ends up dissuading many foreigners from initiating the nationality process, as they fear that they will not pass the exams.

On the other hand, the denials in the request for dispensation, since in most cases it is assumed that if the applicant is young enough, she must be able to make the effort to learn to read and write and therefore would not be exempted from passing the exam.

The latter case is solved through a partial waiver, something that is automatically granted by the Ministry to the latter group.

One of the most important keys to avoiding these problems is to have the advice of an expert immigration lawyer.

In that sense, our team is ready to help you with any doubt or legal need you may have as a foreigner: 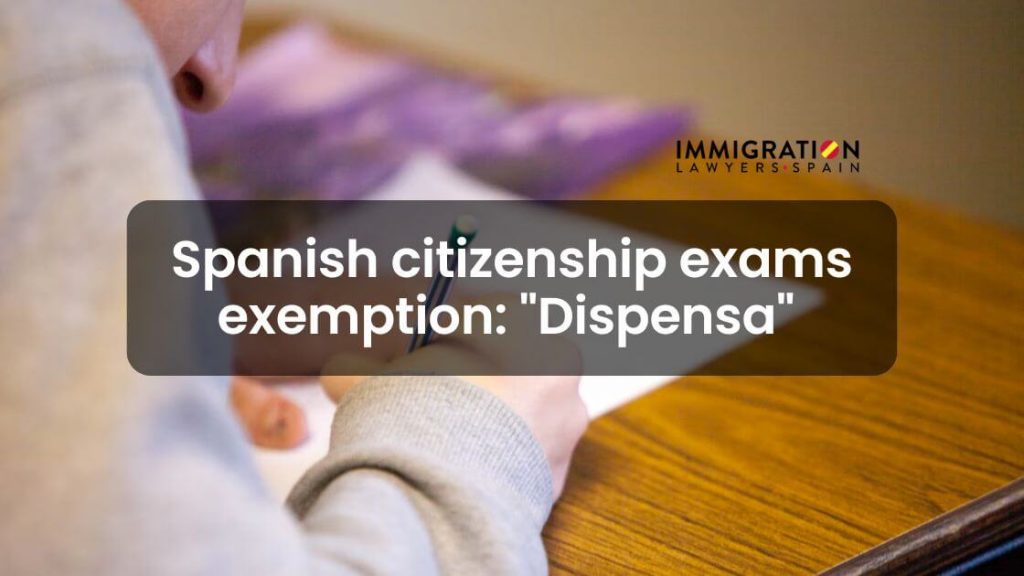