Immigration Regularisation in Spain during 2021 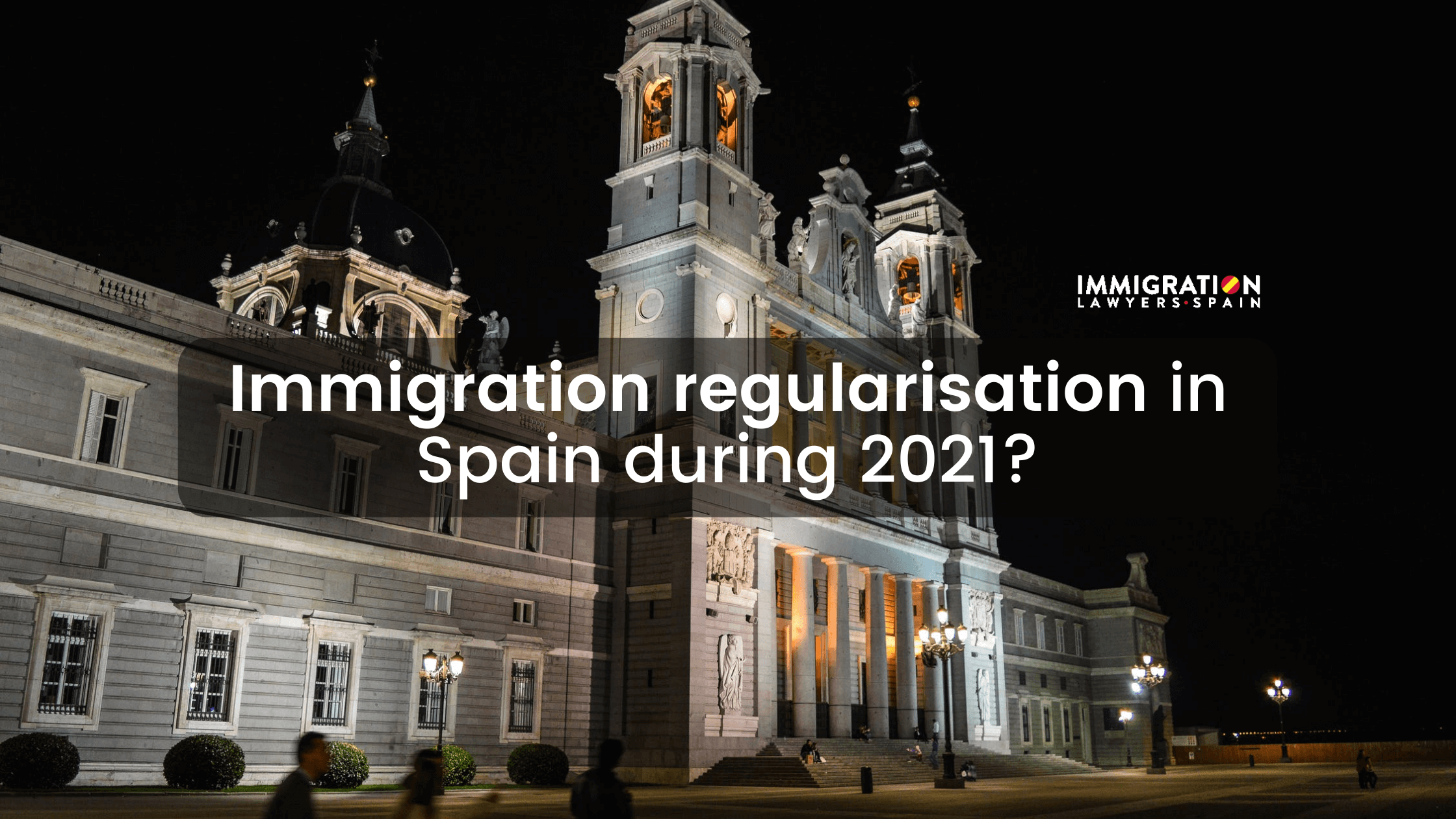 For many years, the idea of a possible mass regularization of foreigners in Spain (now under an irregular situation) has become more and more popular. Firstly, due to the many news items in favor of this idea. And secondly, because of the need created by the global pandemic for a reconstruction of the economy based on reindustrialization. This means that granting papers to many non-EU irregular citizens could become soon true.

In this post we analyze the viability of regularization and whether it will indeed happen in 2021.

What is an immigration regularization?

Regularization is the process by which the government of a country grants, for extraordinary reasons, residence to all those foreign citizens who are in an irregular situation (without papers).

And this is something that during the last months the almost 0.5 million foreign inhabitants in Spain who find themselves in this situation have requested, especially with the entry of the Socialist Party to the Spanish government.

There are also several political parties in Congress that defend this initiative, aiming to make it a reality.

That is why many consider that this can be a totally correct measure during the current times, and the idea has even created movements like the “RegularizaciónYa” with increasing popularity.

In fact, certain proposals have been made to begin the process as soon as possible, but they are still inconclusive.

So, will we have a regularization of foreigners within the Spanish territory?

How likely is a mass regularization of foreigners in 2021?

To answer this question we will study the situation from two possible points of view.

We will first look at the arguments that might make us think that there will be a regularization, and then transition to those reasons that can make it somewhat difficult during current times.

Factors pointing towards the regularisation

If we use the precedent of other European countries (as is the case of Italy), the possibility of a massive regularization is by no means a crazy idea.

On the one hand, governments feel the need to protect all those foreigners in an irregular situation living in the country now more than ever, especially during the effects of the pandemic. This situation has made their living conditions even more complicated, and their needs are a concern for many sectors.

But not only that.

On the other hand, foreigners could be the key to the recovery of the Spanish economy. We are talking about a country that is realizing how the great dependence on tourism and on the restaurant business can generate great problems in the face of adverse situations, and that undoubtedly needs greater industrialization in order to grow.

And foreign labor could be key in this plan of future reconstruction (foreign labor that is already living in the country), covering job positions until now almost empty by the lack of demand from the Spanish.

But, in addition, the inverted population pyramid in the nation and the critical situation of the pension system creates a need for the the Spanish economy towards more people within the working age (that can generate more income to the Social Security system).

Again, inmigratns would be a perfect ally in this regard, encouraging the move towards regularization.

However, there are certain realities that would make this mass regularization strenuous.

The first of these is the difficulty of implementing the initiative within a European legislative framework that would make it very difficult and sets certain limits.

Especially if we take into account that in Spain there are already different regularization processes for foreigners that are 100% available.

We are talking about individualized processes called arraigo, that although involve complex requirements to be met, are a very recurrent alternative within this segment of the population.

Ways to regularize your situation today

As we have seen, regularization in Spain is not yet a certainty, and it seems that it will not happen in the near future either.

However, as a foreigner who is in an irregular situation in the country, you have different ways to obtain your residency, basically through the different arraigo procedures.

In addition, during the last few months, the requirements to regularize your situation through social roots have been made more flexible, making it much easier for foreigners.

You can access the different aids for undocumented immigrants here.

Below you will find all the details explaining the different regularization options available today and which are the requirements for each.

Social roots or “arraigo social” is undoubtedly the most frequent and habitual method of regularization.

It is the process by which a foreigner can obtain his or her residence permit in the country under exceptional circumstances, provided that:

Here are 8 keys to successfully apply for this type of rooting.

Although this type of arraigo only requires 2 years of irregular living in Spain, due to its requirements it is not an easy option for anyone.

The labor arraigo requires the foreigner to have been working for 6 months illegally, and that she reports her employer for the improper hiring.

The “reward” that the government offers the foreigner for reporting this illegal behavior is her residency for exceptional circumstances, which is not usually the option chosen due to the emotional bond that is established between the foreigner and her boss.

If you are the father or mother of a minor Spanish child (born in Spain), or the child of a Spanish citizen, you can apply for family arraigo.

You can find all the requirements to initiate this procedure here.

On the other hand, if your parents or your spouse have European nationality, you can apply for your residence permit in Spain by means of the community card.

This card allows you to live and work in the country for 5 years, and is the most common option when your spouse or partner is European.

In this case, a previous procedure is required: the registration of the marriage (less usual) or of the civil union (“pareja de hecho) in Spain to formalize the relationship, something that can be processed even if the foreigner is in an irregular situation.

Foreigners from countries with serious political problems may qualify for residence authorization for international protection.

This is the case for refugees.

While it is true that in most cases the application for this procedure will be denied, there is one particular nationality that is usually granted residence on humanitarian grounds: Venezuelans.

As a conclusion, we can state that mass regularization in the country is perhaps something very unlikely (at least by now).

However, the current need of a country that requires new labor to fill positions that the Spanish themselves do not want to cover and to generate higher contributions to the Social Security to create a more stable economic model in the long term, suggests that the government could adopt some alternative measures that move towards the same goal.

Thus, and considering all the changes we have seen during the past months in which the process of arraigo has become much more flexible, everything points to the fact that the regularization taking place would come from the hand of providing greater facilities at the individual level for foreigners in an irregular situation (instead of doing a mass action).

What’s next is staying really alert to the new changes in the Spanish immigration law from now on, waiting to see if residency due to exceptional circumstances (now with requirements that are difficult to meet) becomes a much more affordable option for foreigners.

If you have any doubts or would like us to inform you about the best way, in your particular situation, to obtain residency in Spain, do not hesitate to contact our team of lawyers: