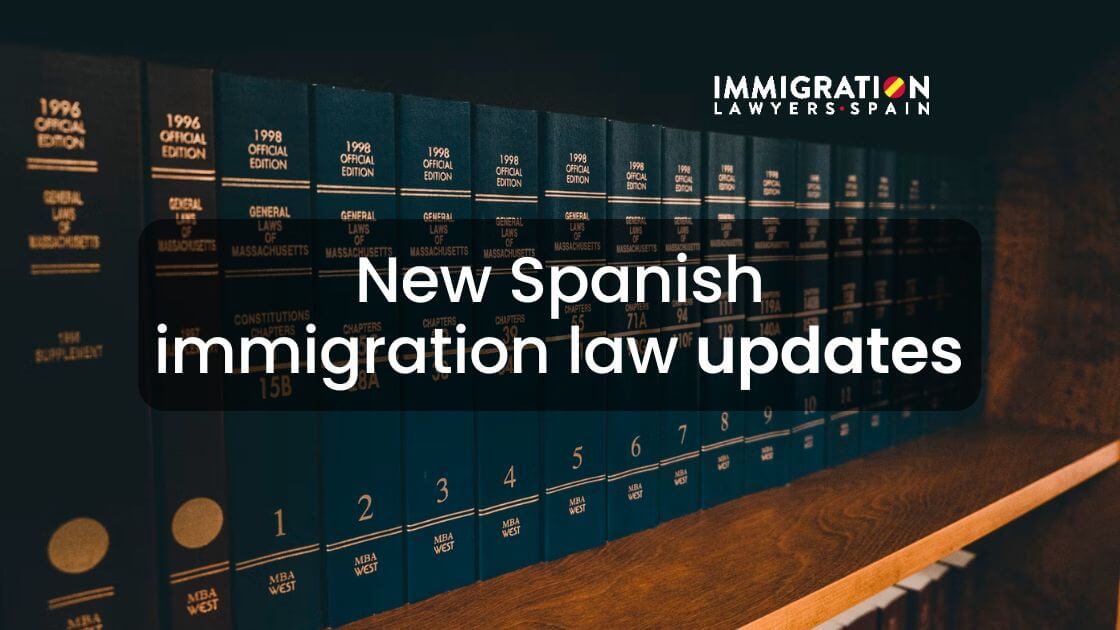 We have great news for you! Whether you are already in Spain or plan to do so in the future, what you will find out in this article will undoubtedly benefit you. For very soon there will be a major update in the Spanish immigration law, and that will imply very advantageous changes in order to obtain your residence (and especially work) permit in the country.

Below you will find out all the measures that the government is going to implement with this reform, which will facilitate the opportunity for foreigners to get hired from their home country, for students, and for foreigners who are currently illegally in Spain.

What is this new immigration update all about?

As we were telling you, the government is going to modify and improve Royal Decree 557/2011 (RLOEX), which regulates the immigration law in the Spanish territory.

After several years, the current immigration regulations are beginning to be outdated in many areas, especially when it comes to everything related to the labor market.

Thus, with this initiative, the government intends to adapt the different immigration procedures and residence permits to the current context, which is quite different and for which the previous immigration framework was not prepared.

It is an important renewal of the immigration regulations which, broadly speaking and in summary, seeks to facilitate the incorporation of foreign workers (very necessary for the country’s economy) into the Spanish labor force.

To this end, and as we will now see in the measures section, obtaining of work permit will be made easier through different changes, new residency categories will be created, and many other innovations will be implemented that will undoubtedly bring great advantages for the entire foreign community.

However, at present (and it is important to emphasize this), all these measures are in an initial developmental phase, as they have been included in a draft, which is subject to final changes, modifications, and improvements.

Hence, everything we will see below, although it is expected to come into force in a short period of time, is only an approximation.

All new measures from the new immigration law reform

Below we detail the main measures that this immigration law reform will implement.

We still do not know 100% how they will be finally incorporated, and what will be all the details and requirements for each point. And that is because at the moment we only have a draft with which we can preview everything that is being considered for modification.

Therefore, the points that we will now explore are subject to many changes and improvements, but they will certainly provide a clear idea of what we can expect.

Hiring foreign workers will now be much easier

Currently, obtaining a regular work permit from the country of origin is a very complicated task. There is a shortage occupation list that greatly limits the jobs that any foreigner can access: if the offer is not included in this list, she cannot apply for the permit (unless she is Peruvian or Chilean).

Thus, one of the major modifications to the immigration regulations will come from the hand of facilitating the hiring of foreign workers from their country of origin.

How will this be done?

First of all, with big changes in the catalog of jobs that are difficult to fill, opening up the range of these job positions.

To this end, the Ministry of Economic Affairs and Digital Transformation would be given the ability to determine which sectors are considered strategic.

This would allow the possibility of adding extra jobs to the shortage list, making it less restrictive and opening the doors for many more foreigners to get their work permit.

But that’s not all.

If companies need to urgently hire personnel and can prove it, this point would be considered by the immigration office to facilitate the process.

In other words, the foreigner would be able to apply for positions not within the shortage occupation list if a particular company is experiencing difficulties in filling that particular position on an urgent basis.

Again, another measure that will make it much easier to obtain an employee work visa.

Self-employed work will be fostered

On the other hand, if as a foreigner you want to start your own business or develop your professional activity independently (as a freelancer), you can also benefit from this measure.

As you may already know, obtaining a self-employment permit is currently a complex and tedious process, especially for those foreigners who want to start a non-innovative business in the country.

Thus, with the new reform, some of the elements that make it difficult to obtain this permit would be eliminated, encouraging a greater number of foreigners to start working as “autónomos” in Spain.

To this end, it would remove, for example, the need to prove sufficient investment and economic means to set up the business, as well as the need to demonstrate that the company will be able to generate employment in the country.

However, the requirements of minimum experience and qualifications needed by the applicant would be maintained.

We are talking about the cases of renewal of family reunification, for example.

Foreigners with a student visa will have greater advantages to work

As we have already mentioned, this reform revolves around the labor market and work for foreigners, and in this sense, students will also be able to benefit greatly.

Thus, those foreigners who are in Spain with their stay for studies will have ample advantages to get their work permit.

While it is true that this is something that has been sought since 2018 with the incorporation of the figure of residence to look for a job, this measure aims to take things even further, increasing the possibilities for these students.

Basically, a reduction of the now 3 years necessary for the modification of a student visa to a work permit is proposed, as long as there are professional or scientific merits that accredit it possible.

In addition, the total number of hours that a foreigner with a student visa can work per week would be increased from 20 to 30.

Finally, and this is a piece of news that will probably surprise you, the creation of a new figure of arraigo is also being studied: the arraigo for training or studies.

In this case, we would be talking about a residence permit for exceptional circumstances of 1-year duration that would be granted to all those foreigners in an irregular situation who commit themselves to start an official studies that will allow them to obtain a degree upon completion of their studies.

As long as these studies are maintained, the foreigner could extend this residence for an extra 12 months.

We are talking about the regularization of foreigners who are trained in sectors with high labor demand and who can occupy positions that currently do not have enough national workers.

In terms of requirements, although we still have to analyze the latest details, this new “arraigo” for studies would require having resided in Spain for 2 years in an irregular situation and not having criminal record.

Those foreigners who have worked irregularly for at least 6 months during the last year could start benefiting from a new residence and work permit.

This is a figure very similar to the labor roots, which also requires a minimum of 183 days worked without a job contract, with the only difference being that the new permit would not require demonstrating a minimum period of residence in Spain (vs the 2 required years of the labor arraigo).

In addition to the 6 months worked, the foreigner will simply have to provide a judicial resolution or administrative resolution issued by the Labor and Social Security Inspectorate to prove that he/she has actually been working.

Until now, a foreigner with a work permit as an employee could not work as a self-employed individual (unless she had compatibility (and vice versa).

The new modification in the immigration law is intended to change this.

Thus, whether you have an employed or self-employed work permit, once renewed you will be able to work indistinctly for a company or as an independent professional, without having to demonstrate compatibility.

And this without having to go through any legal procedure, because until now, in order to change from self-employed to employed (or the other way around) it was necessary to go through an immigration application, which in many cases was tedious. With the new immigration changes and updates this will no longer be necessary.

Do you have any doubts about the new measures? Send us an email and receive personalized legal advice: 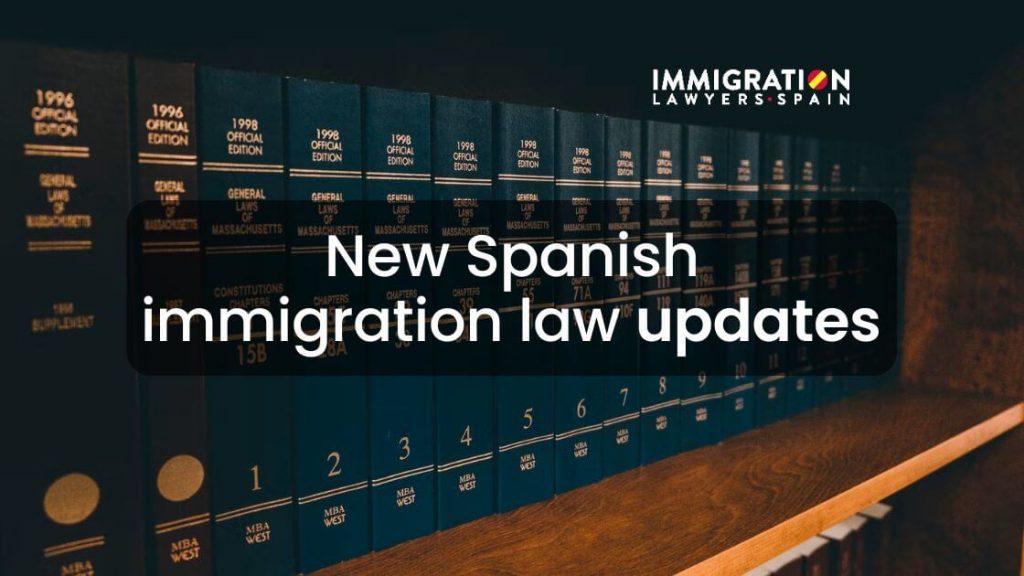