Authorization to Leave & Come Back to Spain (“Autorización de Regreso”) 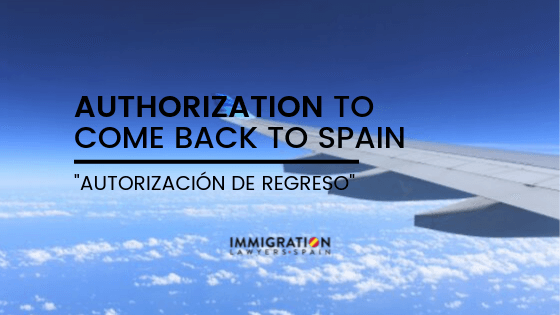 Summer is a time in which many go back to their home countries. They leave Spain for several days or weeks in order to visit their family and friends. But that presents a crucial question. What happens if I am in the middle of an application process or renewal for my residency in Spain? Can I freely leave the country? What should I do?

There is a document that will completely solve that situation. This document is called “autorización de regreso” or authorization to come back to Spain.

Let’s dive deep into this topic.

What is a return authorization or “autorización de regreso”?

The authorization to come back to Spain is a document that will allow you to leave and come back to the country once your residency card has expired or is going through a renewal process. It is also called carta de retorno or autorización de regreso, in Spanish.

If you are planning to leave the country (maybe due to your vacations), and your card will expire during that period, you must request the “autorización de regreso”.

This has an important implication. If you are willing to avoid legal problems, don’t travel just with your expired card.

How to leave Spain while applying for your residence card

Furthermore, this document will be also valid in those cases in which you are going through the initial process of your residency application.

If you got your application accepted, and now waiting for the fingerprints appointment or to receive the TIE card, you can leave the country.

You are also allowed to apply for the authorization to come back to Spain and leave the country.

But with a slight distinction. You will have the need to justify why exactly are you leaving the country. And the reasoning behind your departure should be convincing enough.

On the renewal case, by just explaining why you are leaving Spain is enough.

Required documents for the authorization to come back application

For the application, you will have to fill and submit the model X-13. After that, book an appointment at the Police Office, and pay the corresponding fee.

Make sure to bring your passport (original), and the resolution or procedural safeguard of your residency application.

An important piece of advice: plan in advanced

The period of the year in which most people request this document is during summer. The months of June, July and August are full of foreigners living in Spain demanding their “autorización de regreso”.

That is why we wanted to give you this piece of advice.

The Spanish Immigration Office will be packed with tons of applications. That is why all the appointments conceded in order to emit this document will enjoy notable delays.

So try to book your appointment way before the date in which you are planning to leave Spain.

Do you really need this paper to return back to Spain?

The truth is that maybe you don’t.

Many times, when the transportation means you will use to travel is not an airplane, you don’t need to request this document.

That is because the National Police issues a letter in which it explicitly announces the lack of need to request an “authorization de regreso” if you travel, for example, by ferry.

In those cases, the document that demonstrates that your residency card is being renewed will be enough (along with the expired card and your passport).

Bear in mind that if you will travel by plane and not during the months of summer, this situation won’t apply to you.

Document valid in Spain, and just in Spain

Let’s take the case, for example, of an individual from South America that is traveling back to his country during summer. During that time, her Spanish residency card will expire.

She had requested an authorization to come back, so won’t have any problem in entering the country once again when her holidays come to an end.

Nevertheless, she finds a flight to Paris that is way cheaper. That is why she considers the option of going first to France, and taking a plane to Spain afterwards.

Is she allowed to do that?

The answer is simple: no. The “autorización de regreso” is valid just in Spain. That is why it won’t be valid in any other country you travel to.

She must buy a direct flight to Spain.

Can I come back to Spain if my return authorization has expired?

As a general rule, no; it’s not possible. Your return authorization will be requested on the border control; hence having a valid document is essential.

Nevertheless, there are a few exemptions.

For example, if your authorization to come back has expired during a state of alarm situation, it’s validity is automatically extended.

Apply for your return authorization now

Do you need help applying for this document?

In case you would like to avoid any possible legal issue when leaving Spain and then coming back, our immigration lawyer team is ready to help you!