What is the Schengen Area and Which Countries are Part of it?

Europe, the Schengen Area, the European Union, the Euro Zone… Terms that may seem very similar but that imply huge differences. And understanding those differences is essential, especially if you are planning a trip to any member country or directly living in one of them.

In this article you are about to finally discover all the differences between each of those structural organizations, as well as the list of specific countries that make up each of them.

What is the Schengen Area?

In 1995, an initial agreement was signed in the town of Schengen (Luxembourg) between 5 countries to eliminate common borders and allow all kinds of free movements between their territories.

Until today, there are already 26 countries within this treaty, giving name to what is known as the Schengen Zone or Schengen Area.

What does this territorial organization consist of?

For practical purposes, it is an agreement that allows the free mobility of people, goods and services between all the member countries who are inside.

But it is very important not to confuse the Schengen Area with the European Union, because although many countries are part of both groupings at the same time, this is not the case with all of them (besides implying great legal differences).

So why is the Schengen area so important?

Among other things, for tourism and travel: the requirements and criteria for entry and the granting of short-stay visas are common throughout this region.

So, if you come from a non-European country (e.g. Latin American), you could visit any country within the Schengen Zone with complete freedom.

For example, you could enter through Spain, and visit Greece, Italy and France freely.

Generally, this would happen without any border control when traveling through each country, although it is true that recently some countries have started to impose extra controls after the terrorist attacks that took place during the last years, and the massive movements of refugees moving to these countries.

To summarize, any movement between countries that are inside the Schengen Area is equivalent to moving within the same state.

Differences between the European Union and the Schengen Zone

It is very easy to confuse the Schengen Zone with the European Union, especially in terms of borders and implications.

As you may already know, the EU is an agreement between 27 countries, an international organization that establishes general guidelines when it comes to trade, health, education and economy.

However, all member countries are fully independent: they continue to apply their own laws as their leaders decide but always within the framework established by the EU.

What are these countries?

It is very simple.

Thus, almost all EU countries plus Iceland, Norway, Switzerland and Liechtenstein belong to the Schengen area.

What are the implications of this difference?

Let’s go back to the mobility issue:

Differences Between the Eurozone

Finally, we find another type of territorial division, in this case based on a common currency.

The Eurozone is the group of European countries that use the euro as their official currency.

It is made up of 19 states, most of which belong to the European Union.

In addition, there are also some microstates (such as Monaco, San Marino, Andorra, and the Vatican), which use the euro after an agreement (but are not members of this zone).

And Kosovo and Montenegro also do so, but in this case without prior agreement.

Understanding which countries use this currency (and therefore are in the Euro Zone) will be very important if you are planning your trip.

You could make the mistake of exchanging your local currency for the Euro, thinking that the whole of Europe uses this currency, only to realize that the destination country still uses its traditional and particular currency.

List of countries that make up the Schengen Area

Knowing the complete list of states that make up the Schengen Zone is essential.

So, which countries form the Schengen Area exactly?

Entering any country of the Schengen Zone will allow you to move freely through the rest of the member countries, usually without border controls.

But that means that you must meet a series of specific requirements to enter this macro territory.

First of all, you may need to apply for a Schengen visa to cross the first border.

Here you can see if your country requires a visa or not to enter as a tourist, as it depends on whether there is an agreement or not.

It is important to mention that this is a unified visa. That is to say, there is no specific tourist visa for Spain, another for France, etc.

If you want to enter any of these territories, you must apply for a Schengen visa, and this is valid for all member countries equally.

Finally, remember that if your country does not require a visa to enter the Schengen Area, you must apply for the ETIAS travel permit online from the end of 2022.

On the other hand, it is also important to have travel medical insurance that meets some requirements.

Mainly, it must offer coverage in all the countries within the Schengen Zone, and cover up to 30.000€.

You can find here all the information and requirements about this insurance.

Maximum amount of time you can spend inside

Remember that you can stay in this zone for a maximum of 90 days (once this period is over, you must leave or you will be under an irregular situation).

And, in order to re-enter, you must have spent at least 3 months outside.

Do you have any doubts? Our team of immigration lawyers is here to help you out: 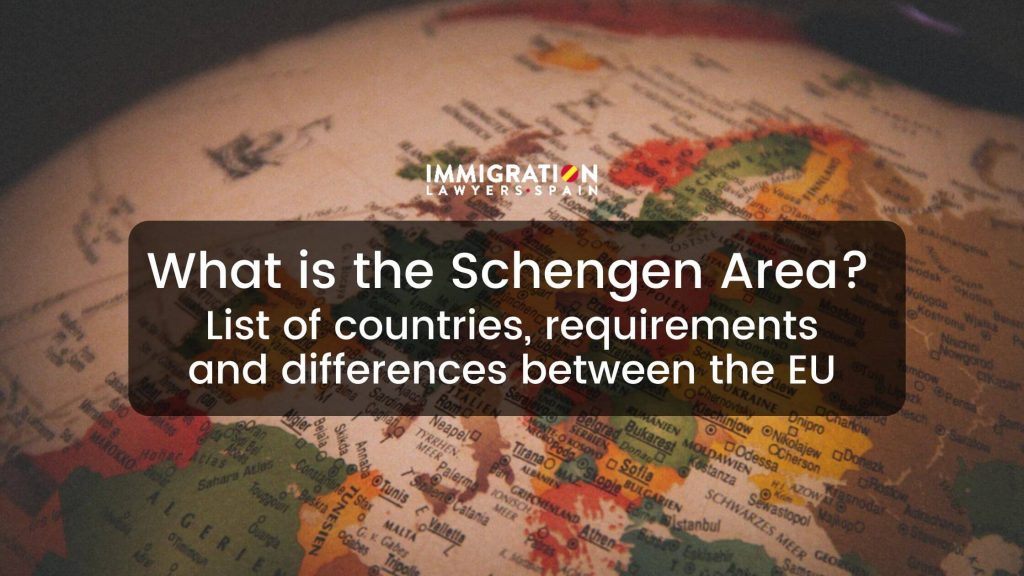