Visas Under the Entrepreneur’s Law 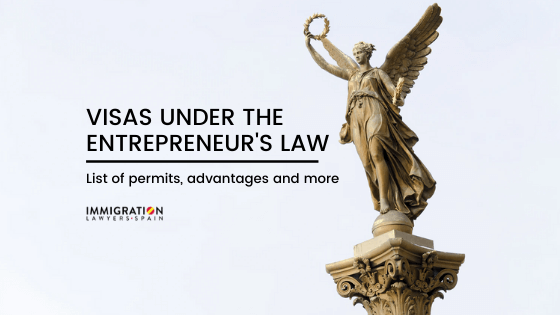 The Spanish immigration law establishes different visas and residence permits. Each of them is adapted for the different situations of the foreigner who wishes to start living in Spain However, after the publication of a special BOE in 2014, a new regulation was created: the Law for Entrepreneurs.

And It set a list of new residence permits, governed by that law. Thus, in this article, we will analyze which are the main visas under this the Law for Entrepreneurs, and all its advantages.

On September 27, 2013, the law to support entrepreneurs and their internalization was published trough a BOE. This new law would create a set of visas that, instead of being under the general immigration regime, would be regulated by it.

In other words, all the requirements and legal application process would be different with these new permits.

The objective that the Ministry of Foreign Affairs adopted when creating this regulation was to encourage both investment and the entry of international talent into Spain. This, as with neighboring European countries, would mean an increased influx of foreigners from all over the world moving to Spain with their families.

You should also know that most applications for these visas must first be approved by the UGE, the Large Companies, and Strategic Sectors Unit.

But why are these visas such a recommended option? Basically because of all the advantages they offer.

Main advantages of these visas

As we mentioned, all the visas under the Law 14/2013 were created to facilitate the process of investors, entrepreneurs, and foreign talent when moving to Spain.

To this end, the rules of the game were adapted to be more advantageous for all those non-Europeans in the process of legalizing their status as foreigners in Spain.

A series of facilities that undoubtedly avoid many legal obstacles were implemented.

So, let’s see what those advantages are and how you can benefit from them.

Under the general law, the immigration office can take up to 3 months to issue a response after receiving the application for a residence card.

That is certainly a long time.

However, when applying for any residence permit under the Entrepreneurship Law, the time is greatly shortened. The resolution period is just 10 days.

In most cases, in order to renew your residence card in Spain, you must have stayed at least 183 days in the country per year. This is a problem for many foreigners, as they directly become residents for tax purposes, thus paying taxes as residents.

That is, if they spend over 6 months per year outside Spain, their residency card gets automatically extinguished.

However, the investor visa and work visas under this law do not require such a stay for the renewal. You will only need to visit the country once a year in order to renew your visa.

For those who cannot take advantage of this regulation, here are 3 strategies to optimize your taxes even though you are a tax resident.

Length of the initial residence authorization

Any residence card under the general regime will initially grant you to live for one year in Spain. Once this period ends, it can be renewed.

But with a golden visa or an entrepreneur’s visa, this is not the case. The initial residence is directly for 2 years, something that saves many administrative procedures by not having to start the renewal so early.

Possibility to get the residency directly from Spain

There is no need to start the procedure from the country of origin. You can skip the step of getting your visa to travel to Spain.

With any of these residencies, it is possible to convert your status to legal directly from Spain, for example with your tourist visa.

For all other cases, you can get more information on how to enter Spain with your tourist visa and get the residence permit here.

Move to Spain with your family

Another of the most important advantages is the possibility of obtaining the residency for your relatives by means of a joint application.

In other words, if you meet all the requirements for one of these visas, you can easily include your family members in your application.

They will also receive an authorization to live and work in the country.

Which are the visas under the Law for Entrepreneurs?

We have already seen all the advantages of applying for one of these visas. Something that makes it an ideal path to obtaining your resident status in Spain.

But which are these visas exactly?

Without any doubt, one of the easiest ways to start living in Spain. With the golden visa you will only need to invest 500,000 euros in real estate and the residency will be yours. It’s that easy!

However, if you prefer, you can also choose to invest in Spanish companies, buy debt or government bonds.

But in those cases, the minimum investment can be increased up to 2 million euros.

If you would like to set up your startup in Spain, the entrepreneur’s visa is for you. This card is granted to those foreigners who set up an innovative business that promotes the socio-economic development of the country.

In this case, the requirements are a little more strict, as a complete business plan is required. Through it,  you need to demonstrate the viability of your project and how it can promote the country’s economy, as well as create jobs.

Keep in mind that setting up a traditional business will not allow you to get the entrepreneur’s visa. You will have to start something innovative that does not yet exist. A company that uses technology and breaks with the market.

You can access a complete guide with all the requirements and application process for the entrepreneur visa here.

Getting a work permit in Spain can be a complicated task. However, as long as you have higher education and receive an offer as a manager/manager or in a technical position you can opt for a work permit as highly qualified worker.

This will avoid the need to go through the much-feared shortage list that governs general working visas.

As an important requirement, you will have to earn more than 50,000 euros per year for your offer to be valid for the application.

Let’s say you work for a multinational company based in Spain. In that case, if you are transferred to Spain for work or vocational training purposes, the intra-corporate transfer visa will be the easiest option for you.

Access a complete guide with the two types of intra-company transfer residency (ICT EU and national), as well as requirements and step-by-step application process here.

On the other side, students can also benefit from this law.

In case you have finished (or are still coursing) during the past 2 years level 6 studies or higher, you can move from student visa to a special type of residence permit that will allow yo to internship.

The application is really simple, can be done online, and avoids the need to wait 3 years as a student to get a work permit.

You can access a complete guide on this internship work permit here.

Finally, there is a specific visa created for the scientific community and research people.

A visa for all those who travel to Spain to work in an R&D center or carry out research tasks under an agreement with a public or private entity.

It can also include teachers hired by universities or higher education centers.

Although each of the above visas has its own particular requirements, there are also a number of general requirements that any foreigner must meet. If you still have doubts or need our team of lawyers to help you get any of these visas, don’t think twice. We are at your complete disposal!
Let us help you get your visa
0/5 (0 Reviews)

2 Replies to “Visas Under the Entrepreneur’s Law”