New Residence Permit for UK Citizens in Spain after Brexit 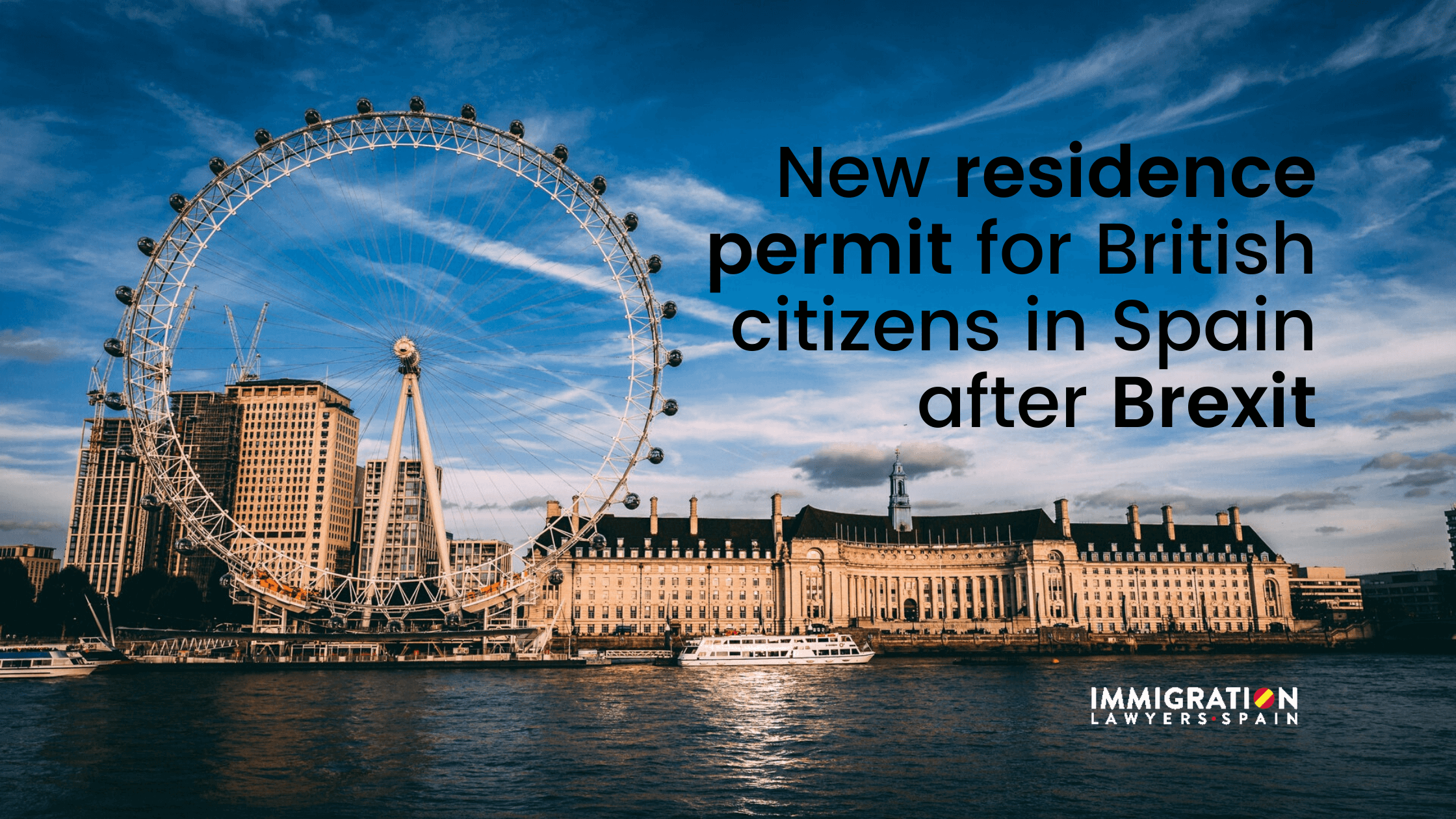 The instruction issued by the Secretary Estate and Migrations at the end of 2020 made it very easy for British citizens and their families. They could obtain a new residence card as if they were still Europeans, or change the one they already have to a special one, while maintaining their legal status.

But things have changed now. In this article we are going to explain everything you need to know about this new post-Brexit residence permit in Spain.

Don’t hesitate to continue reading, what you need to do from now on will be crucial to avoid legal problems!

The Brexit agreement and its transitory period

On January 31st of 2020, things changed. As you already know, the United Kingdom left the European Union through the Brexit process.

This certainly raised a lot of questions for British citizens. For overnight, they ceased to be European Union citizens.

And obviously this would have many consequences, especially for all those British who either lived in Spain with their card as Europeans or those who wanted to get one in the immediate future.

Would they lose it? How would they apply for it from now on?

From the 6th of July to the 31st of December of 2020, all UK citizens could change their residence card into a new, special type of permit.

To make the transition as easy as possible, a transition period was set until the end of the year so that all these individuals could change their legal status without the need to carry out all the formalities as if they were non-Europeans (much longer and more complex).

The new residence card for British citizens in Spain

These three groups of foreigners have either obtained their current residency with a procedure that corresponds to a European (much easier), or they would like to do it as soon as possible to avoid legal hassle.

That is why the first two had to change their residency cards before 31 December into this new special type.

And for the last and third group, if they started the application process before the end of 2020, could still obtain it, even if they are not yet in Spain, with the same facilities as a European.

But what to do now that we are already in 2021? Good news: there’s a new instruction that lets to proceed with this transition even though 2020 has already ended. And that is true as long as you can prove you were living in Spain before the end of last year.

Find out here all the details about this new measure.

About the legal status of the British after Brexit

Let’s sum up what we’ve covered so far.

In other words, until the 31st of December, the Community rules still applied to British citizens and their relatives, whether they were already living in Spain legally or whether they intend to do so before the end of the year.

However, from the 1st of January of 2021, all British citizens who start their immigration procedure from 0 then fall under the general immigration regime. That is to say, as non-European citizens.

They will then be subject to the same immigration legislation as those from, for example, the United States, Japan, or Russia.

This, without a doubt, makes things much more difficult to regularize their situation in Spain: extra legal requirements, longer procedures, application from the country of origin and not from Spain…

Nevertheless, if they were in Spain before January 2021, then still have time to get their residency easily as if they were EU citizens (and the same happens to their relatives). This is the only exception.

That’s why we recommend that you start as soon as possible just no matter your situation.

Our team of immigration lawyers can help out. You just need to send us an email to info@immigrationspain.es and we will provide the assistance that you need.

How to get your new Brexit residence permit

In order to obtain this new permit, there were the following categories:

We are talking about citizens from the United Kingdom who already live in Spain.

What should this group do?

From the 6th of July and before the 31st December 2020, they will need to get an appointment at the national police office corresponding to their registration address.

After attending in person, they will apply for the new Brexit residence card.

Remember that if if you did not formalize this immigration procedure, you can still do it in 2021 (also online via the government platform).

Unlike the previous case, here we are referring to those citizens who have been in Spain for a minimum of 5 years, now with a permanent certificate.

This group of foreigners may also apply for the new card following the same procedure mentioned above.

But, in this case, its validity will be for 10 years.

British citizen in Spain over 5 years without UE permanent certificate

This is a small modification from the previous case.

What should the British who have been in Spain for more than 5 years but had not yet applied for the permanent European Union certificate do?

In other words, those who are still living with a temporary certificate.

As in the case of those who do have the permanent one, they can also get it.

The only thing they will have to do is prove that they have actually lived in Spain for more than 5 years (same legal procedure).

British citizen that has never obtained the EU card

Lets now look at the case of those British individuals who have not yet started living in Spain, but who, knowing that it will be much easier until the end of the year, would like to start the procedure as soon as possible.

In this case, we find an extra step.

The first thing he or she will have to do is start to start at the foreigners’ office. This can be done in person through an appointment or online (with the help of a lawyer if you don’t have a digital certificate).

If you meet all the basic requirements, you will be granted a residence permit in Spain to live beyond December 31.

These requirements are the same as for any European citizen who starts living in Spain. Basically, you must have sufficient economic means and medical insurance.

Once this part of the process has been completed, you must make an appointment with the police to get the actual  new residence card.

Relatives of UK citizens with a family member card

What about all the relatives of British citizens living in Spain with a Community card?

The procedure is exactly the same.

They must formalize the change from their current community card (as a family member of an EU citizen) to this new special post-agreement card, which can be done after an appointment at the police station.

UK citizen relatives in the country of origin

The new instruction also talks about those relatives of British citizens who want to start living in Spain but aren’t yet in the country with a regular permit.

If they do not have a Community card, they must apply for the special residence permit at the foreigners’ office, and again, once they obtain a positive resolution (after fulfilling all the same requirements needed for the Community card as a family member), the police office will issue the physical card.

Remember that all of them have until the end of 2020 to carry out this and all the procedures mentioned before.

Any application involving British citizens or their relatives that is being processed and waiting for a resolution is now directly assimilated into the new withdrawal agreement card.

How long does it take to get this card?

Once you get an appointment at the police office and request your special brexit residence permit, it will take a maximum of 20-25 days to obtain it.

However, remember that you only have 6 months to regularize your situation, so we recommend that you start as soon as possible before its too late! 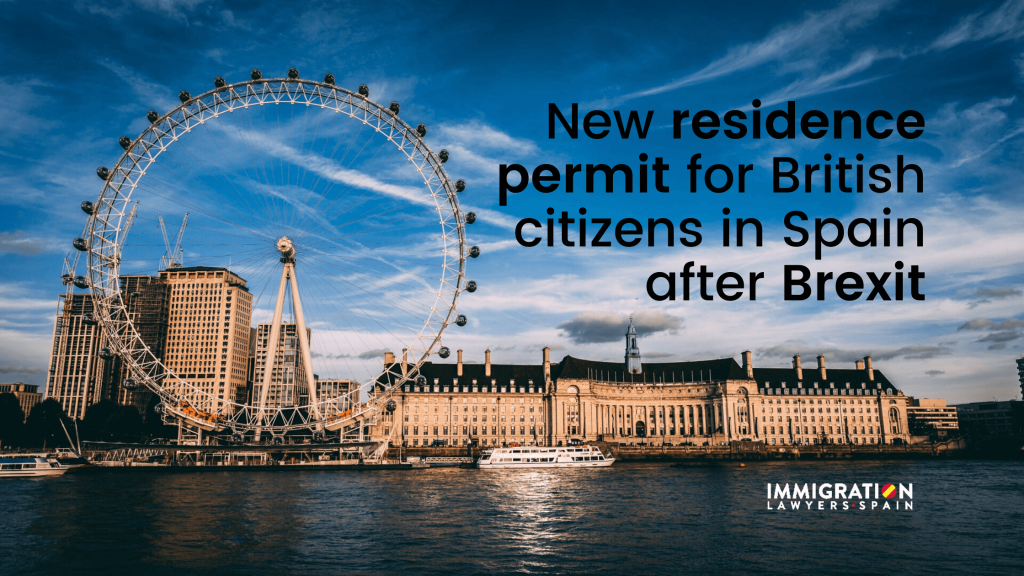